From the maximum field of 16 players, she was on top form all night long to claim victory and receive the 1st Prize of 10000 baht.

In the final she beat another player at the top of their game, Switzerland’s Joel Wenger, to seal a well deserved win.

Joel had qualified for the final through the One Loss Side of the draw, so had to beat Phaa twice to lift the trophy, and duly won the first set by 7 racks to 3 (race 7-5) to take the match into a decider.

The second and deciding set was pretty much one way traffic the other way though, as Phaa ran out a comfortable winner by 5 racks to 1.

Consolation for Joel as Runner-Up was in the form of 5500 baht prize money.

Next in line was another Thai girl, Nok Yung, who played well to finish 3rd collecting 4000 baht, and she was closely followed by Filipino Jayson de Chavez in 4th, pocketing 3000.

The Player Auction Prize Pot totalled 19400 baht and was won by Praew from Bangkok.

She paid the top price of the night at 3000 baht to get our champion, but the gamble paid off as she bagged the 1st Payout of 7400. 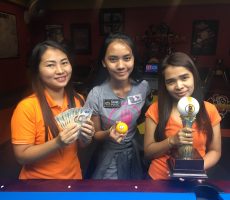 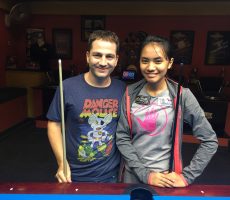 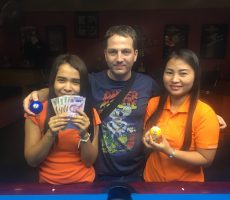 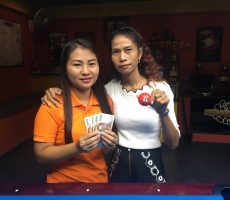