From the full field of 16 players, he remained undefeated all night long in the Double Elimination format, winning five consecutive matches to pocket the 1st Prize of 10500 baht.

In the final he beat Ireland’s Vincent Coleman, 3-6 in racks (race 3-9) to seal victory and lift the trophy.

Vincent reached his second final in the space of 48 hours but again had to settle for the Runners-Up spot and 6000 baht.

Next in line came England’s Adrian Rivers in 3rd Place, taking home 4500 baht for his efforts, and he was closely followed in 4th by local Thai girl Nid Mirantee Phukthamt who claimed 3000.

The Player Auction Prize Pot totalled 27600 baht and was won by Craig Jones. 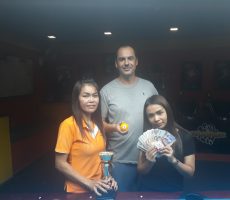 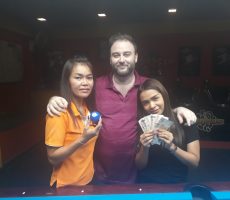