FINALLY HE DID IT!!

After 81 tournaments and almost six months of trying, England’s Sam Lowe finally got his nose in front on Saturday night to win our Thursday 9 Ball Grand Final for Season 24.

Having finished as Runner-Up in last week’s Sunday Grand Final, and then again losing out in the final of Tuesday’s 10 Ball earlier in the week, this time he got everything right to go all the way to the 1st Prize of 10000 baht.

He had to do it the hard way though, after losing his very first match of the evening in the Double Elimination format, winning seven consecutive matches on the One Loss Side of the draw to lift the trophy.

From the full field of 16 players, he beat our Dutch regular Albert Gringhuis in the final without conceding a rack to seal a very impressive performance.

Albert also played well to win four successive matches and reach the final from the Winners Side of the draw, but unfortunately had no answer to the in form Englishman, and took home 6000 baht in 2nd Place.

Next in line came local Thai Oran Tanawat Q, who repeated his 3rd Place finish from last week’s Grand Final, and he was closely followed in 4th by staff member Gan Kanchana Chinboot. 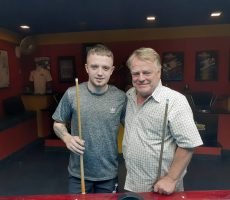 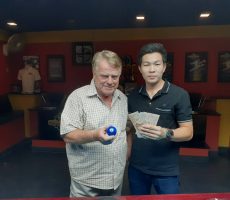