Congratulations go to our Aussie regular Adam Lux for winning our Sunday 9 Ball Grand Final for Season 24 on Saturday night.

From a near full field of 15 players, he played at the top of his game all night long to lift the trophy and pocket the 1st Prize of 10000 baht.

In the final he beat England’s Sam Lowe in the second and deciding set (race 4-7) to seal victory and his handicap now moves back up to A+5 as a result.

Our Runner-Up Sam played some excellent pool to reach the final after losing his very first match of the evening.

He won six consecutive matches on the One Loss Side of the draw to reach the final, before falling just short against our champion in the deciding set, and took home 6000 baht in 2nd Place.

His handicap is also increased by one rack to A+8.

Next in line came local Thai player Oran Tanawat Q who claimed 4000 baht for finishing in 3rd Place, and he was closely followed by Germany’s Gerhard Schebler in 4th, collecting 3000. 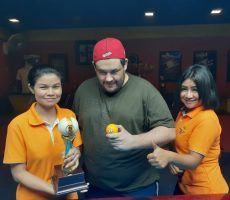 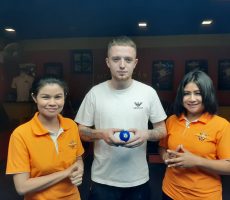